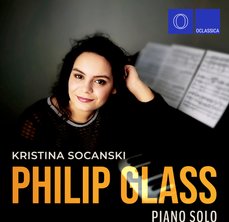 While Socanski's programming choices mirror those of previous pianists, her emotive approach brings gravity to her interpretations not present in the astringent, often clinical performances by her peers.
Socanski reaches deeply into Glass's minimalistic psyche to extract what exists inside and outside of those purposefully repeated melodies and motifs characterizing the solo piano work of the composer. The pianist identifies and presses her thumb on that brooding quality lurking just below the surface of Glass compositions. Socanski does this by accentuating the often hidden elements of the music, like the descending left-hand figures in the No. 11 Étude and "Wichita Vortex Sutra" and the dramatic tension created by carefully modulating the tempo and rhythm. This latter effect may be heard in both "Glassworks: Opening" and "Mad Rush" (both favorite recording subjects of pianists). What Socanski brings to Glass is a well-defined pathos, an emotive momentum expressed by inference and nuance. Full- blooded and robust, Socanski's performances are revealing and accessible, providing a new perspective on Glass and his piano composing.

“What sets apart the approach of the talented Serbian-Norwegian pianist Kristina Socanski is her intention to reclaim expression, or as she puts it, “I investigate the non-repetitive in repetition…” Socanski sets out to dramatize each étude, and in a sense this is where she achieves her greatest success. Just because the printed score verges on the sterile, it becomes fascinating to see what the pianist’s imagination can extract for expressive effect. It is impressive to hear how much she actually finds, or creates…Because she doesn’t exaggerate her effects, I think Socanski has expanded the meaning of Glass’s music. She has made it her own, which after all is the performer’s prerogative, and thankfully so, because this is where great interpreters thrive.»

"In her recent interpretation,Kristina Socanskicreates a sense of beauty not often heard when listening to performances of Philip Glass' music. Socanski's second album release, consisting of a curated selection of Glass' solo piano pieces from across two decades, equally touches seasoned and amateur listeners with minimalist waves tinged with hints of pianistic romanticism. Too often Glass' brand of minimalism is deemed robotic and unemotional; to combat such, Socanski redefines what the music offers the performer and listener. She masks the mathematical repetitive structures behind the curtain, finally letting one experience the universal affect of this distinct musical world."

"Now, I must confess that I am not an admirer of Philip Glass’ music as a whole; there are some works that I find appealing but rather more that I do not. I find his brand of minimalism, or ‘New Simplicity’, uninvolving for the most part. I therefore approached Kristina Sočanski’s programme with a little trepidation. However, it opens and closes with two of my favourite Glass tracks:OpeningfromGlassworks(1981), as fine an encapsulation of Glass’ style, or method, as might be wished for and one which I find entirely successful on its terms; and the magical nocturneTruman Sleepsfrom the film score to Peter Weir’s extraordinary cinematic fable,The Truman Show(1998; Glass actually appeared in one scene towards the end of the film, playing a shortened version of the piece). Sočanski has recorded Glass before, on a delightful, if rather brief, Sheva album (SH223) of modern American pieces late in 2019, including three of the 20Etudes(1994). In this all-Glass programme, she grows into the playing as her programme proceeds, coping with increasing confidence and elan with Glass’ endlessly repeating rippling patterns and textures and sudden, lyrical chordal sequences. She is markedly swifter—and much less meditative—in theGlassworks Opening(at 4’ 36”) than Vikingur Olafssón (7’ 45”) in his acclaimed DG selection (479 6918) in 2016. Olafssón might be slicker (who wouldn’t be at such a tempo?) but Sočanski imparts a winning sense of dynamism otherwise absent. She also provides barnstorming accounts ofEtudes Nos 6, one of the grander, most outwardly virtuosic of the sequence (Olafssón is half-a-minute quicker, as he is inNo 5), and15, where manages the slow build of grandeur and tension rather well. The problem—inherent in Glass’ music and style—is that when one moves on toMetamorphosis: Two(1988, inspired by Kafka’s celebrated novella and known more widely from its use in the filmThe Hours), orMad Rush(1979)—originally an organ piece designed for a visit by the Dalai Lama—the same compositional tricks and fingerprints, even content to a agree, recur. Even withWichita Vortex Sutra, composed in 1988 to accompany a poem by Allen Ginsburg, and which I did not beforehand, loses impact in an all-Glass recital since so much of it feels familiar from other tracks (and not in a good way). Sočanski does her best to mitigate the effect of sameness by micro-variations of pace, providing markers in the torrent of notes, though this does occasionally give a slightly halting feel to the flow. But then the final track,Truman Sleeps, breaks in, sweeping away all doubts and cavils, like theOpeningfromGlassworks, the perfect distillation of Glass’ style, and beautifully played here. The disc is worth the purchase for these inspired ten minutes alone. Nicely balanced recorded sound, rather close-miked and here and there making the piano tone sound a touch clattery."

"One can like or refrain from the music of Philip Glass (b.1937). The undersigned is definitely someone who can be fascinated by the composer's simple melody lines, which has made him one of the true greats of minimalism.

This is the second album by Serbian-Norwegian Kristina Socanski. And she has devoted the entire album to music by Philip Glass.
Some may think it gets a bit monotonous, but this is where you can really dive into the composer's thoughts about the long lines, about the repetitive, and about the simple. And Socanski conveys the music in a very fine way. She does not overdramatize - she lets the music air where it needs it and she is faithful to the composer's writings (at least to the scores of his piano pieces that I have in my collection).

I have a great feeling for many of the pieces she has included on the record. "Metamorphosis II" is a piece of music that just flows - well suited to letting your own imagination run wild.

In "Mad Rush" it is liberating to listen to Socanski's perfectionism where, as the most natural thing in the world, she makes the three against four rhythms work in the best way. "Wichita Wortex Sutra" and "Opening" from "Glassworks" are two small favorite pieces that she fortunately includes on the record. Here again, the simplicity she prefers in the music is central. And it is of the very elegant kind that she serves these pearls.

Tip: Sit down, turn off the lights and let the music embrace your thoughts. It's well worth 73 minutes of your life!" 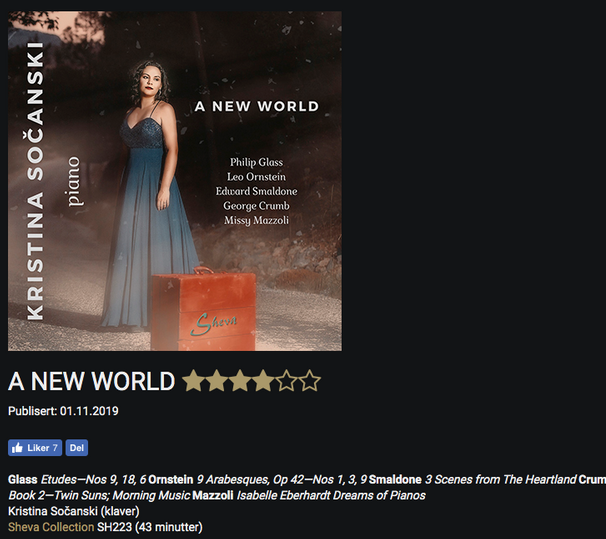 Serbian-born Kristina Sočanski has been resident in Stavanger since 2001, where she attended the University, and has also studied in Oslo, Weimar and Copenhagen. Her interest in American music was sparked six years ago by a chance encounter with the music of George Crumb (b1929 and still active). The second book of his seminal cycle Makrokosmos (1973) is part of her repertoire and two of its twelve pieces, the opening Morning Music and the fourth, Twin Suns, are included here. Crumb remains one of the greatest and most influential pioneers in sound from the twentieth century. His music incorporates a wide array of timbres and playing techniques: for instance, Morning Music with it sheet of paper placed on the strings to create a vibrant buzzing sonority, and Twin Suns in which the ‘Aeolian harp’ technique of playing directly on the piano strings is used.

Sočanski sounds completely at home with these techniques and gives nuanced performances of both movements. She is equally at home with Glass’ minimalist idiom in three of his twenty Etudes (1994), whether the straightforward repetitive flow of No 9 (as it gradually traverses up the keyboard), or No 18’s more complex tapestry, with its wistful and nostalgic atmosphere reminiscent of his pieces used in the film The Truman Show. Her main competitor in the Etudes is Vikingur Olafssón, who recorded 10 for DG in 2016. Sočanski takes a markedly different view to Olafssón, not quite as fluent in No 9, smoothing out the wider tempo extremities that Olafssón revelled in with No 18. The Icelander has the edge, but Sočanski’s accounts make intriguing alternatives.

Edward Smaldone (b1956) is currently Professor of Music Theory and Composition at the Aaron Copland School of Music, Queen’s College, USA. 3 Scenes from The Heartland (1994) was composed for Donald Pirone, who recorded it for CRI. The Scenes were inspired by imagery in Amy Clampitt poetry, such as, “waves of chlorophyll in motion” (Introduction), “involuted tantrums of spring and summer” (the volatile central Scherzo), and “like figures in a ritual, violets are thick, a blue cellarhole of pure astonishment” (the concluding Nocturne). Sočanski handles Smaldone’s range of moods very adroitly, as she does Missy Mazzoli’s Isabelle Eberhardt Dreams of Pianos (2007), in which she interacts evocatively with a pre-recorded soundtrack to create aural memories of Schubert. Mazzoli (b1980) is a rising star of the younger generation, closer stylistically to Philip Glass than Crumb or Smaldone.

My main cavil with Sheva’s disc is its ungenerous playing time. Sočanski’s programme is carefully constructed and, as a musical sequence, works well, her focus on living composers and small groups of pieces that she feels are complementary. This may explain the absence of anything by Ives or Cowell, though not the inclusion of only three of the nine Arabesques by the extremely long-lived Leo Ornstein (1895-2002). Again, Sočanski’s selection nicely encapsulates the set but at only ten minutes long in total, there was surely room for all nine of these tiny pianistic gems, and indeed more by this very under-rated and under-played composer. The omission is all the more regrettable because they are played rather beautifully. Fine sound, too. 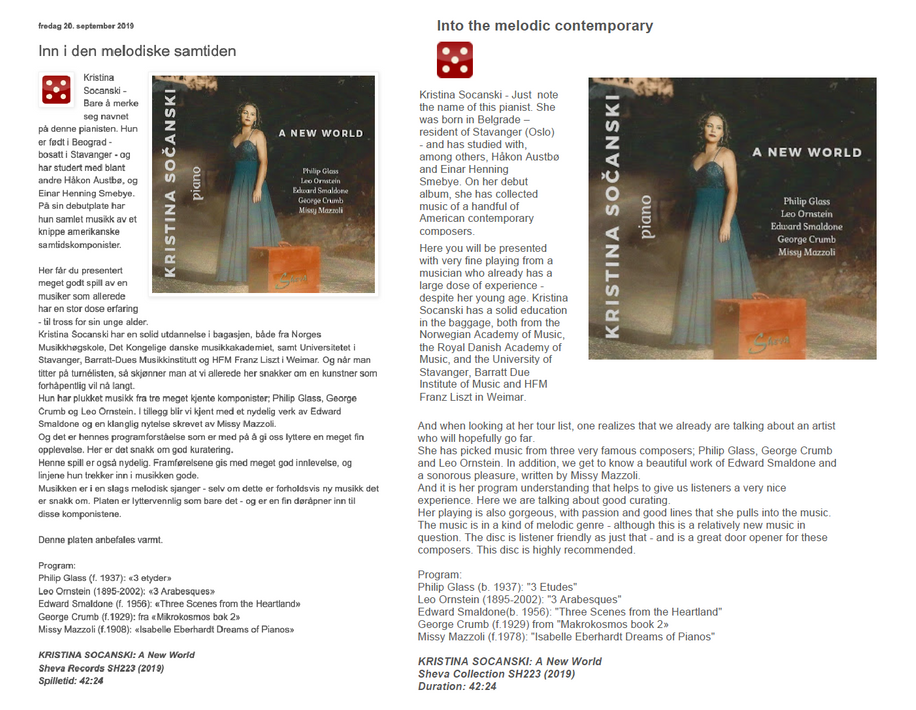 Fill out the contact form to order any of the albums, and a payment link will be sent to you.