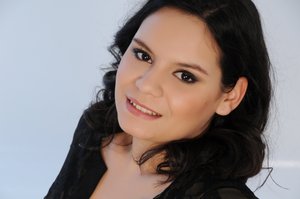 Kristina Socanski is a Serbian-Norwegian pianist. She is a diverse musician who explores both classical and modern repertoire and regularly performs as a soloist, chamber musician and a collaborative pianist, in Norway and abroad. The most valuable musical impulses, she obtained through studies with professors Håkon Austbø, Einar Smebye, Niklas Sivelöv and Friedrich Gürtler. This is reflected through her individual, expressive musicianship, praised for both its poetic qualities and attentiveness in collaborative work

Upon moving to Norway aged eleven, she entered the development program for young, gifted musicians at the University of Stavanger and the Barratt Due Music Institute in Oslo, Norway, and later she studied at HFM Franz Liszt in Weimar, Germany. Kristina holds a Bachelor degree in piano performance from The Norwegian Academy of Music in Oslo and a Master degree from The Royal Danish Academy of Music in Copenhagen. In 2019 she graduated from the “soloist class”, the advanced postgraduate program at RDAM in Copenhagen, specializing in chamber music and accompaniment. Her debut concert was broadcast on the Danish Radio “P2 Klassisk”.

As a prize winner of several international competitions, she has made appearances at several major venues, including the Mozarteum in Salzburg, Weil Recital Hall at Carnegie Hall in New York, and Kammersaal at the Berlin Konzerthaus in Germany. Her performances have also taken her to LeFrak Concert Hall in New York, Stavanger Concert Hall in Stavanger, Oslo Opera House, Tivoli Concert Hall in Copenhagen, Royal Danish Theatre in Copenhagen and Kolarac Concert Hall in Belgrade. Her work has been featured on several Serbian radio and television stations (Radio Beograd 202, RTS, RTV, TV Banat). She has received funding and scholarships from Sparebank 1, Idella Foundation, Oticon Foundation, Den Böhmske Fond, Torp-Pedersen Fondet, Feldthusens Fond and other institutions. As a professional musician, Kristina has received grants from the Norwegian Arts Council, FFUK and other foundations in Norway.

Her artistic activity in recent years has been largely focused on exploration of contemporary music and collaborations with composers. During the studies at The Norwegian Academy of Music, Kristina worked together with the renowned contemporary pianist Ellen Ugelvik. This inspired her to start exploring contemporary music and marked the beginning of a new path. The collaboration with contemporary music specialist prof. Peter Degenhardt at the HfMT Köln has also been of great importance to her trajectory. In 2018, Kristina was invited to Aaron Copland School of Music, Queens College in New York, as a visiting scholar.  She collaborated with prof. Edward Smaldone, and performed some of his music written for piano, among other pieces written by American composers. This was a part of her artistic research project at RDAM, exploring contemporary music for piano written in the USA, which was presented in a well-received debut album released in 2019, with works by Missy Mazzoli, Edward Smaldone, George Crumb, Leo Ornstein and Philip Glass. In 2022 she returned to New York, together with her piano-percussion ensemble “Seit Quartet”, for a concert arranged by The American League of Composers, in which she premiered works by Edward Smaldone and Mads Emil Dreyer.  In the summer of 2022, she reliazed a critically acclaimed CD with works by Philip Glass for piano (Oclassica).

Other collaborative activities have included dance-concerts performances with ballet apprentices of The Royal Danish Theatre in Copenhagen and specialization in accompaniment and opera coaching with Jane Klaviter at the “Bel Canto Institute” in Florence, followed by performances in Italy and USA in 2017.  As a passionate chamber musician, Kristina performs regularly as a member of several ensembles, and is the founder and artistic leader of “Vrsac International Chamber Music Festival” in Serbia.

Kristina has performed in Scandinavia, numerous European countries and in the USA. As a part of her soloist degree, she was a teaching assistant for the piano class of prof. Niklas Sivelöv at the Royal Danish Academy of Music in Copenhagen. She is also an experienced piano teacher, with more than 10 years of teaching behind her. Since 2021, she has been working as a doctoral research fellow at the University of Oslo, and she is currently working on a research project exploring contemporary music and spirituality